https://medium.com/@platomd/jeff-bezos-two-personalities-in-conflict-e50562619c17
Posted by Unknown at 8:49 PM No comments:


https://medium.com/@platomd/marriage-a-legal-nightmare-or-sanctified-union-fb15f041728e
Posted by Unknown at 8:22 PM No comments:


Walls Immoral Imperative or Impractical
Posted by Unknown at 9:44 PM No comments:


Special Purpose Examination (SPEX) is an exam forced on physicians who have been out of practice for a defined period of time. This exam is also given to physicians when their fund of knowledge comes into question. Boards of Medicine provide minimal direction in the contents of this exam. The Federation of State Medical Boards, the creator of the SPEX, does not provide much assistance to help potential examinees pass this test. Therefore, it is up to the physician to seek help to prepare for this very unfair exam. Many aspects of this exam’s contents reflect back to our medical school training decades ago. Books on the market are generally antiquated or do not represent the exam’s true contents. With the latter stated this was Dr. Davis’ rationale to create a concise course to help those confronting this exam to have an improved chance of receiving a passing grade.


Failing the SPEX test two, three or more times is common. Physicians contact Dr. Davis frequently to help them raise their level of awareness to this unfair test’s contents. Though the Federation of State Boards changes this test’s format frequently, its core contents remain the same. More than 12 medical subjects are represented with questions that challenge the examinee’s intellect and memory. Certain styles of questions are presented which an examinee would never expect to see on this exam. This course covers areas most important to the test taker and provides an extensive overview of this exam prior to the examinee sitting for it.


Dr. Mark Davis is intimately familiar with the Special Purpose Examination having mentored numerous physicians towards a passing grade. Dr. Davis has accrued his knowledge of the SPEX by interactions with many who have taken this test and direct inspection of the exam’s contents. Do not go blind into this exam.


The fee is 199 dollars for this course, which is approximately 2 hours in length. Scheduling can be done by contacting the email site: platomd@gmail.com     Thank you. Mark Davis, MD
Posted by Unknown at 2:08 PM No comments:

Final Directives The Final Ethical and Moral Journey to Death

Final Directives: The Legal Ethical and Moral Journey to Death


Government has no heart or soul. Its sole purpose is conformity to legislative and judicial agendas. Step outside of these two realms then the consequences become toxic and untenable. Final Directives: The Legal Ethical and Moral Journey to Death, brings the reader into a domain displaying government’s intrusive hand when a person’s last days are upon him or her. Lacking clear medical directives, during the most sensitive time in one’s life, overzealous prosecutors and judges become the final arbiters whether you live or die. Through a multitude of medical cases this e-book exemplifies why people should detail whether they want to be kept alive by extraordinary means. One case in the book explains why a grieving family was forced by a state government to continue extraordinary therapies though the patient was declared brain dead. This case eventually was ruled upon in the Supreme Court, surprisingly against the family.


In another case a person approaching his hundredth year was kept alive after his brain death was confirmed. Sadly situations, such as the latter case, could have been averted. This e-book discusses the most current means available to make a person’s final wishes known. There are forms, protocols and formats accepted by each state, if utilized, that gives the patient the ultimate authority over his or her body. There are many excellent lawyers in each state who will help families with the legalities of end of life issues. Allow Final Directives: The Legal Ethical and Moral Journal to Death to illuminate a subject too often discussed in the shadows of society. This interesting and excellent read is written by a physician, Mark Davis MD who has counseled hundreds of families facing the death of a love one. Learn how to avoid the emotionally wrenching situations written in this book. Thank you for supporting this effort to make the public aware of this vital issue.


Final Directives is sold by Amazon and other e-book sites. 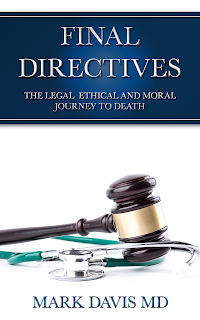 Posted by Unknown at 8:30 PM No comments:

https://www.quora.com/unanswered/Do-you-trust-Facebook-to-keep-your-profile-information-safe-especially-after-the-reported-hacks-to-their-systems
Posted by Unknown at 8:09 PM No comments: