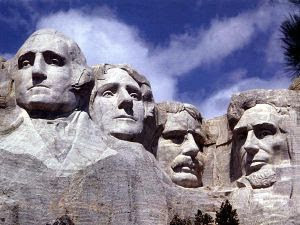 I hope I shall possess firmness and virtue enough to maintain what I consider the most enviable of all titles, the character of an honest man.

Welcome to Open Trackback Monday – a weekly Open Trackback Alliance (OTA) Fest. I’ll will manually add your trackbacks, with excerpts if available, to this page as they come in. Be patient: some trackbacks mysteriously travel the entire blogosphere before they arrive. Here's how to do it:

If you use blogging software that doesn’t have “trackback” ability built in, you can use Wizbang Standalone Trackback Pinger or Kalsey’s Simpletracks.If you don't have trackbacks yet, just leave a comment with an excerpt from your post and a link and I will add that too!If you would like to join the Open Trackback Alliance visit The Crazy Rants of Samantha Burns

H/T to Iraq War News for this history of Presidents Day.

Today is Presidents' Day. Originally set to commemorate George Washington's birthday during the last full year of his Presidency (1796), the holiday was in full swing by the 19th century. When Washington was born, the calendar in use back then put his birthday on the 11th of February, so initially, some people celebrated on the 11th, and others on the 22nd.

Abraham Lincoln's birthday was first observed as a holiday in 1865, one year after his assassination, when Congress held a memorial address. While Washington's birthday was a Federal one, Lincoln's birthday (February 12th) did not become so until much later, although it was a holiday recognized by several states. In 1968, Washington's official birthday celebration was moved to the third Monday in February (rather than always on the 22nd), in order to make celebration of the day easier. This was combined with the shifting of other important dates in order to create a uniform system of Federal holiday Mondays. The law took effect in 1971.

Also in 1971, President Nixon proclaimed the 22nd as "Presidents' Day," a day to honor both Washington and Lincoln, as well as all past Presidents. Officially, though, the day is still known as Washington's Birthday at the Federal level (Nixon's proclamation was not an Executive Order) although the term "Presidents' Day" is the common term. A move to officially change the name stalled in Congressional committee.

The Presidents of the United States (WhiteHouse.gov)

Presidents' Day - What does it mean? (About.com)

History of the Presidential Seal (FreedomHQ)

Life in the White House

King Abddullah: Humaneness and Desert ValuesExcerpt: I thought I was reading the New York Times, but instead it was Arab News. What follows are reports of a Festival held in Saudi Arabia this past week. The words from this Islamic "festival" are reminiscent of American Liberals' rhetoric of anything a...Weblog: Maggie's Notebook Blog

I went bald too, so leave Britney aloneExcerpt: So when I first heard that Britney had shaved it all off I said that I already saw her without panties on and that was old news. "No, you idiot," my wife says, "she shaved the top of her head!" Oh.Well, I can understand that. In 1984 I disc...Weblog: Planck's Constant

We Need VictoryExcerpt: Islamofascism is NOT 'an all-purpose bogeyman created to justify western interference' in other countries. Islamic terror exists, the West did not create it, nor does the West want it to continue to thrive. In fact, we would be extremely delightedWeblog: Right Truth

It Really Sticks in Their Craws, Doesn't It?Excerpt: Reporters, that is. Having to report that the spate of recent murders on the Arizona border are suspected to have been perpetrated by illegal aliens against illegal aliens.Weblog: Freedom Folks

The Hunger for LeadershipExcerpt: As America celebrates, Washington’s birthday, polls find Americans increasingly unsatisfied with the Presidential candidates promoted by the mainstream press. According to a Fox News/Opinion Dynamics poll, 49% of Americans and 53% of Republicans aren...Weblog: Idaho for Cox

The curse of knowledgeExcerpt: I was reading How to Change the World today, and came upon something unexpected. Insight into graphic design.The Curse of Knowledge. Lots of research in economics and psychology shows that when we know something, it becomes hard for us to imagine not...Weblog: Thoughts on Design

Also Trackposted to:
Committees of Correspondence, and The Tar Pit

Posted by Faultline USA at 6:02 AM